Eldritch Horror is a strategy/horror/mystery/role playing board game set in the world of H.P. Lovecraft's Cthulhu Mythos produced by the fine folks at Fantasy Flight games.

In the game, you take on the role of an investigator from the 1920's. Investigator is a catch-all term used to describe the player's character. The player chooses their "investigator" from a myriad of cards. Each character has their own strengths, weaknesses, abilities, and starting items and locations, and professions (from actress to Politician). Players play the game by traveling the globe and collecting clues by having encounters. Each encounter is different and the effects vary from amazing buffs to investigator abilities and stats, items and clues; to crippling injuries that hinder your investigator or even melt away your very sanity.

It's a race against the clock to thwart the awakening of one of the Great Old Ones. The "Doom tracker" counts down to the awakening of a powerful being of cosmic indifference, the occurrence of which means the end of the Earth.

Let me start off my review by admitting that I have owned Eldritch Horror for about 9 months. I only first played the game yesterday after a few doses of Memorial Day liquid courage. The reason for my delay in enjoying this wonderful game is that it can be quite overwhelming once you open the box. For those familiar with Fantasy Flight's catalogue of games, you know that there are tokens upon tokens, cards upon cards in just about every title. 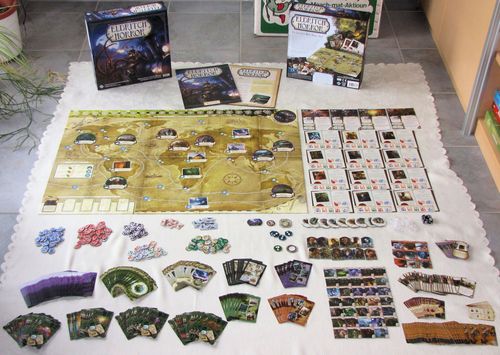 When I first broke out the box, I was shocked to see 11 types of standard sized cards (which are further broken down into multiple subtypes), 4 different types of miniature cards, 15 types of tokens, 12 different survivors, a massive playing board, and TWO rulebooks! After punching out all of the tokens from their sheets and separating the cards, I cracked open the rulebook and quickly became intimidated and frustrated, boxed it back up, and there it has sat until yesterday.

However, in my inebriated state, I summoned my roommate and steeled myself for the endeavor to come. Once I sat down and started on page one, followed the step by step set up instructions, and read from the first rulebook (the second is meant to be a quick reference guide) as I played with two friends. This process was slow, sure! But, after a few rounds, the turn sequence became second nature and we were soon immersed in a global emergency of intrigue and mysticism.

The one thing that stands out as a very unique mechanic is the Mythos Phase. This phase takes place at the end of the round (After all players have completed two actions in the "action phase" and solved an encounter during the "encounter phase) and the person with the "lead investigator" token draws one card from the Mythos Deck. The Mythos cards are the bread and butter of the game as they spawn new mysteries, more monsters, more gates, and advance the "Doom tracker" towards utter desolation. This phase also includes any effects from monsters, spells, or effects that have the "reckoning" icon. Reckoning is exactly that and can cause anything from a deleterious effect on your investigators to overwhelming the players with new monsters and mysteries that must be dealt with. These cards can turn a calmly formulated plan into a devastating mistake.

Another cool mechanic is the "defeated investigator." Once an investigator reaches zero in sanity or health, they are placed on the board in the closest city to simulate either a hospital or asylum. Surviving players can go to those locations containing the defeated investigator and solve the mysteries on the back of their stat sheets. You can also pick another investigator after your starting one is defeated.

One thing to be clear, this game is HARD. Not the mechanics or the rules, but the way the game unfolds makes it extremely challenging to all involved. The one small event taking place in the far corner of the globe, if ignored, can quickly become a disastrous occurrence that needs to be dealt with immediately or else all hope is lost.

I recommend this game to anyone looking to spend a few hours solving mysteries and rolling dice all over the world of H.P. Lovecraft. It's not nearly as complex as it looks right out of the box and after a little organizing of the components, becomes fairly quick to set up and enjoy!

Come in and try a demo today!!!