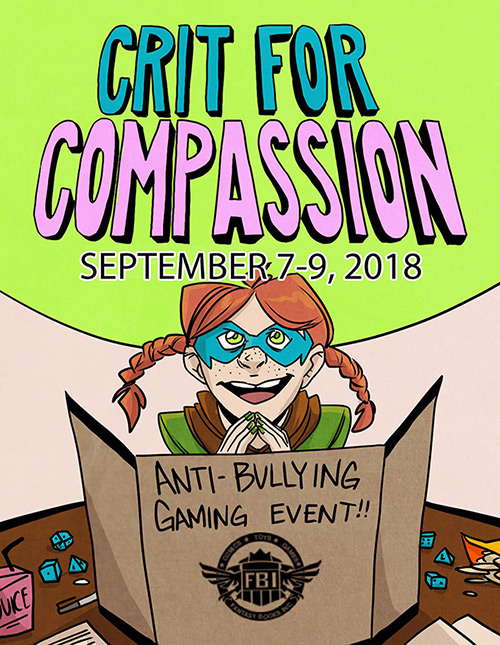 In many role-playing games and video games, a critical hit (or crit) is a successful attack that deals more damage than a normal blow. The Crit for Compassion event will deal that blow to bullying.

Bullying affects 28% of young people from grades 6 through 12 and can be verbal, physical, relational or reactive. As self-proclaimed “nerds”, the staff at Fantasy Books Inc has had our fair share of experiences with bullying which is why we are hosting our first Crit For Compassion Anti-Bullying Event in support of the Megan Meier Foundation, September 7 – 9, 2018.

In December of 2007, Tina Meier founded the Megan Meier Foundation, a 501 (c)(3) nonprofit, in memory of her 13-year old daughter, Megan Taylor Meier, who took her own life after being cyberbullied by an adult neighbor pretending to be a boy on MySpace. Tina is dedicated to preventing such a tragedy in the lives of other families, and to providing direct support for children who are negatively affected by bullying and cyberbullying.

For over 30 years Fantasy Books Inc has been supporting the local comic and gaming hobbyists. With four locations in the bi-state area we offer a large inventory of comics, games, toys and collectibles, safe game rooms, and world class customer service.

YOU CAN MAKE A DIFFERENCE!

During the Crit for Compassion Anti-bullying Event you can play various games and make donations for extra dice rolls, additional card draws or special buffs that will help during your game. Or if you are not into gaming you can “round up” your purchase to the nearest dollar or just donate to the cause. All proceeds from the various forms of donation will go to the Megan Meier Foundation and we will also donate a percentage of the weekend sales on behalf of Fantasy Books Inc.

Your support will help raise money for Megan Meier’s programs including leadership workshops, speaking engagements and resource center that touch over 75,000 children, parents, educators and professionals throughout the year.

Each year, 13 million children are bullied or cyberbullied in the United States, and the consequences can be devastating. Proceeds from the event will help support:

The current details of the Crit for Compassion Anti-bullying Gaming event are below. Games and buffs are subject to change. Visit this page often for the more up to date information.

Raffles each day: Every person that plays in an event gets a ticket, extra tickets can be purchased for $1 each or 6 for $5. Prizes will be raffled off throughout the events. All proceeds to charity. Raffle tickets will also be "spent", getting marked with a sharpie, to gain bonus effects during games.

Wheel of Death Painting contest
Contestants will be competing to have the best paint job on a miniature after a specific amount of time. All contestants will paint a Wizkids D&D mini. Every 5-10 amount of minutes, the wheel will be spun restricting the painters in some way (Must use only one hand, cannot use dominant hand, someone shakes the table etc).

Board Games - Smash Up